Are you looking for a really really good gift? We can help you.

Give Bitcoins as a gift – Guaranteed better than gold.

An extraordinary gift. Which, by the way, has enormous future potential.

A gift – an investment

And so you buy a guaranteed unique gift:

One of the best present I ever make. After print out the card, I was sure that I get a unique present, that nobody else ever had before. It was perfect!!

Bitcoin as a gift

With us, you can easily buy Bitcoin as a practical bitcoin crypto card.

Simply select the value and choose the design.

A gift – An investment – Better than gold. Bitcoin vouchers – Bitcoin cards.
Only available from us. 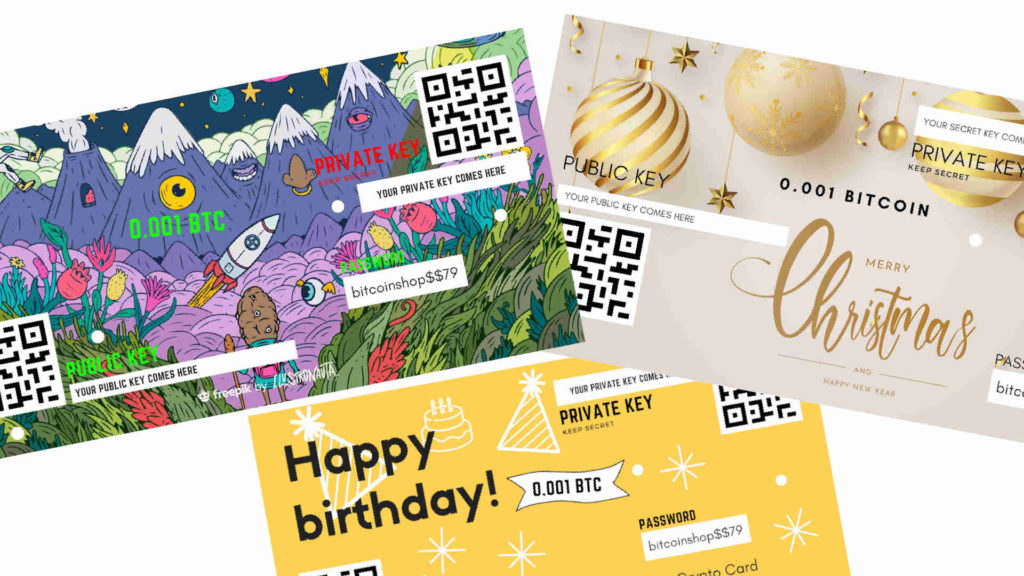 Bitcoin (BTC) is the world’s first decentralized digital currency. It is created and stored electronically. It is “digital money” that can be sent over the Internet and serves as a means of payment.

Bitcoins do not exist physically (there are no bills or coins), but the “digital money” is cryptographic algorithms. A complex mathematical system.

Unlike all other currencies, Bitcoins have no central institution. Consequently, there is no one to issue or manage the money. No central bank, no state and no group. Since Bitcoins are mathematically limited to 21 million pieces, this currency is also protected against inflation and also serves as a wealth investment.
A Bitcoin transfer is peer-to-peer (from participant to participant), which means that no bank, state or financial institution stands in between. Thus, the transaction takes place directly from A to B. There is no detour via a bank or a clearing house, such as Master Card, Visa, a bank or even a state.

On the one hand, this brings some advantages:

On the other hand, you have to be aware of one thing:

– Between the owner of the Bitcoins and the money (Bitcoins) there is no bank or clearinghouse in between. You are responsible for the safe management of your money yourself.

How does the Bitcoin gift card work?

You will find two keys on the Bitcoin Gift Card. The public key and the private key.

The private key is like your PIN number from your bank. This means that no one can see it – except you, of course. Whoever has the private key can access the Bitcoins.

The public key is like your IBAN number. You can send more Bitcoins to this address. It is important that only Bitcoins are sent to this address. Other crypto currencies never reach the gift card and are therefore lost.

Are my Bitcoins on the gift cards secure?

They are disconnected from any Internet connection as long as the Bitcoins are not digitized to use them. These wallets are also called “Cold Wallets”.

This is the most secure way to store crypto currency. On the other hand, you must of course not lose the gift card, otherwise you will not be able to restore your Bitcoins.

One of the best present I ever make. After print out the card, I was sure that I get a unique present, that nobody else ever had before. It was perfect!!

How can I see how many Bitcoins are on the card?

To see how many Bitcoins are on the Bitcoin Gift Card, you need to access the Blockchain.

All Bitcoin transactions are recorded here. Completely anonymous, of course. No one can guess that your public key belongs to you
Visit the Blockchain on the following page:

Just enter your public key at the top of the search bar. You will now see how many Bitcoins are located at this address. The public key is your Bitcoin address. Depending on the design, the card will say “Public Key” or “Bitcoin Address” on it.

I have ordered the bitcoin gift card as a PDF document. What do I have to pay attention to?

If you have ordered the bitcoin gift card as a PDF document, you will receive the card in a password-protected .zip file. The following applies:

Be sure to check your spam folder as well.

How to print out your bitcoin card?

How can I use the Bitcoins on the gift card?

It must therefore be stored with special care. We recommend storing the Bitcoin Gift Card in a safe deposit box.
We hold on to it:

•  Bitcoins on the gift card are absolutely safe from hacker attacks if they are not digitized.
•  Anyone who loses the card has no way of restoring the Bitcoins.

You can think of your Bitcoin Gift Card as a Bitcoin purse. A certain number of Bitcoins are stored on it. When the day comes that you finally want to send your Bitcoins, you need another Bitcoin “purse”.

We recommend either a Smartphone Wallet (so you can conveniently use the QR Code) or a Desktop Wallet for your computer. Which one you choose is up to you. The procedure is always the same.
You need to digitize your Bitcoins to send them. 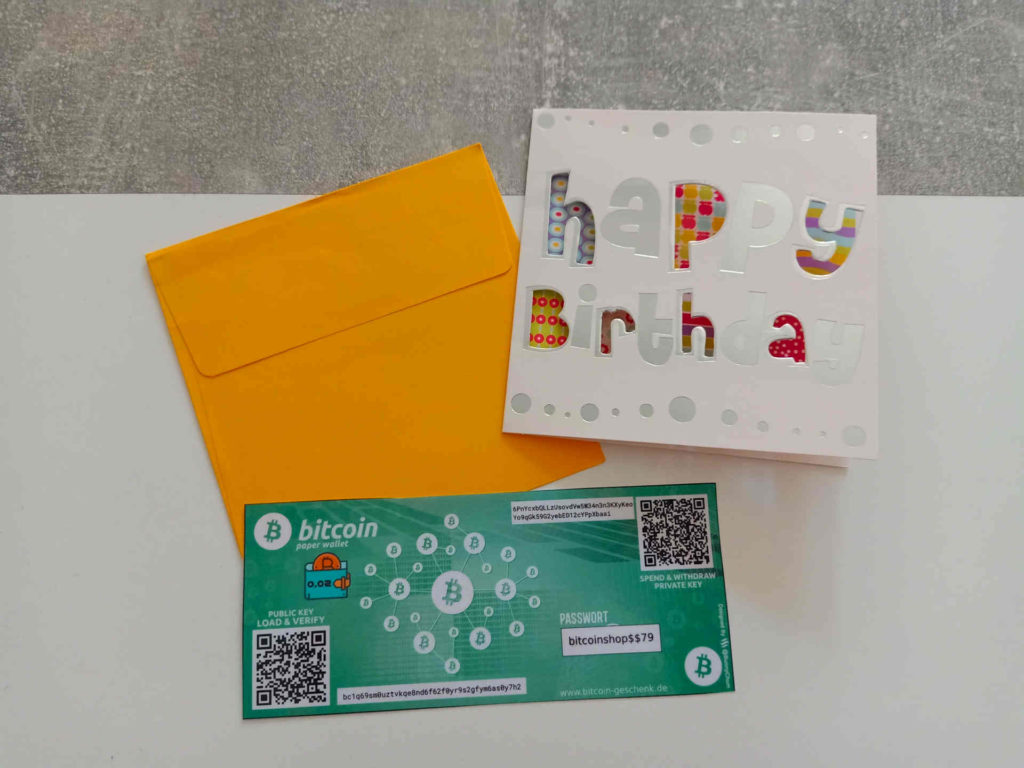 Bitcoin Gift Card as a present

How long does it take to receive the card?

Usually you will receive the card within 48 hours. However, in some cases it may take a little.

Be sure to check your spam folder as well.

Digitize your Bitcoins on the gift card

There are several ways to digitize the Bitcoins on the gift card. In any case you need the private keys + the BIP38 password on the card.

Note that once you have digitized the Bitcoins, the Bitcoin Gift Card is no longer secure and should not be used any further.

In this example we digitize the Bitcoins with a Smartphone Wallet. The “Bitcoin Wallet” app from the manufacturers “Bitcoin Wallet developers” is very suitable and makes the process easy for you.

A more professional wallet is the Bitcoin Wallet from “myCelium”. On this wallet, please make sure that you leave the “fees” in the normal range when sending the coins, otherwise it may happen that the transaction is not confirmed.

If you send your Bitcoins to another address, use the QR Code. Transactions once made cannot be reversed in the block chain.

I have an iPhone. With the app “MyCelium” the error message “invalid bitcoin address” appears.

Unfortunately, it happens with the iPhone that the MyCelium app does not work properly and you can not digitize your Bitcoin card. Unfortunately, we have no influence on this. Whether the developers bring out an appropriate update ecc. we can unfortunately also not say in advance.

We therefore advise you, if you have an iPhone, to use the app “Coinomi”.

How is the price on the Bitcoin gift card made up?

The price on the Bitcoin Gift Card is made up of the current price of the Bitcoins. The price is determined by an service provider.

This calculates the average price of over 150 marketplaces to an average value. You can find it here.
Furthermore, we charge a fixed surcharge of 40€ to 60€ depending on the exchange rate. We calculate the surcharge for:

How do I make cash from my Bitcoin Card?

Once you have digitized your Bitcoins, for example on a smartphone wallet, you must send your Bitcoins to the appropriate marketplace. Each marketplace provides a public key for your personal account.
We recommend Bitcoin.de
For years a German, reputable marketplace for trading Bitcoins.

This is how you go about it:

Further help for Bitcoin.de can be found on the website under FAQ.

Please note: Once a transaction has been made, it can NOT be undone. This also applies if you enter an incorrect address. Therefore we recommend that you use the QR Code.

What happens if I lose the card?

If you lose your Bitcoin Gift Card there is NO way to recover the Bitcoins on the card.
You alone are responsible for the safekeeping of your Bitcoins. You can find more information here.

How should I store the Bitcoin Gift Card?

We recommend that you store the Bitcoin Gift Card in a safe place. Ideally a safe deposit box.
The card should be protected from:

Bitcoin as an investment?

Originally, Bitcoin was created as a currency. A currency that makes it possible to pay without a third party.

A third party is for example the bank. But Visa, Master Card or EC (Electronic cash) are also companies in this sense, which are responsible for administration.
With every transfer you make, these companies manage the actual transaction. And they do this electronically. If you transfer money to someone, they will be credited with the number of the corresponding amount in their current account. And you can do this digitally, visible in online banking.

Bitcoin does the same – but without a third party. You yourself are responsible for the safekeeping of the Bitcoins.

The technology is new and has enormous potential. It is far from having arrived in the rest of the world. Much too strange seems the idea that no banks are needed anymore. Even governments and countries are not always interested in it. At least not all of them.
But let’s take a look at our Swiss neighbors, for example. In the city of Zug, Bitcoin has been accepted as a means of payment since the summer of 2016.

But the exchange rate fluctuations that Bitcoins has experienced in recent years are far too great. That’s why many manage their Bitcoins as an investment.

Especially for many investors Bitcoin has proven itself as an alternative investment. 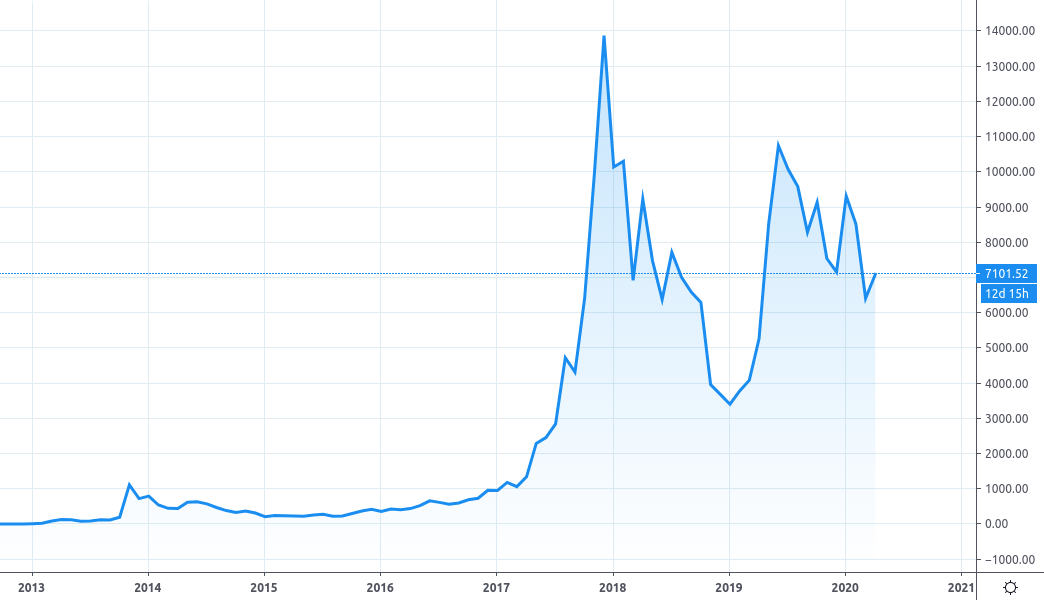 You can find out more about which cookies we are using or switch them off in settings.

Just click on "Accept" if you agree and want to continue browsing undisturbed.

bitcoin-geschenk.de uses cookies to provide you with a perfect experience! Cookie information is stored in your browser and performs functions such as recognition on your website and helps our team understand which areas of the website are most interesting and useful to you. To do this, analytics, personalised content and advertising tailored to you must be handled correctly.

You can adjust all your cookie settings at any time by navigating to the tabs on the left.

If you deactivate this cookie, we cannot save the settings. This means that each time you visit this website, you will have to activate or deactivate the cookies again.

This website uses Google Analytics to collect anonymous information such as the number of visitors to the website and the most popular pages.

Please activate the absolutely necessary cookies first so that we can save your settings!